It’s been a while since I’ve written an article. One of those reasons is I had the opportunity to take a bit of a summer vacation across the country to Richmond, Virginia. Besides the wonderful weather, seeing friends and the many, many monuments and historical locations in the area, I managed to find myself in front of some board games. During our visit to the Virginia Museum of Fine Arts (VMFA), I started to notice a few pieces that really stood out to me. Of course, I’m talking about board games. One of the most fascinating things about human history is how we have gone so far from our humble beginnings but at the end of the day as the years go by, we are still human. Just as much as I enjoy snacks and board games with my close friends and family, so did some ancient Near East fellow roughly 4-5 thousand years ago.

It was truly amazing as I started to look into this topic just how prevalent games, and even board games, are in human history. There are wall paintings of various pharaohs or statesmen of Egypt playing the ancient game of Senet. In the VMFA, I was able to see firsthand two small statues of Liubo players: an ancient Chinese game that is believed to be the ancestor of Backgammon.

The fact is so many cultures from across the world made and played board games and went to great lengths to depict mythological or historical figures. I would say this is a testament to the closeness of human culture and games as a past time. Many of you have probably played Mancala before or at least seen a mancala board. Seeing different styles of mancala boards that were made with the intent of being decorated pieces unto themselves could show just how important these objects were to those who owned them. 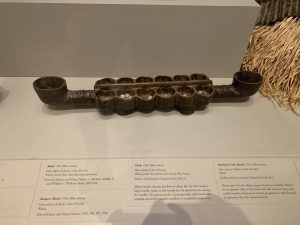 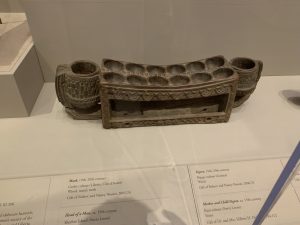 (Above: Mancala Boards from West Africa)

And of course, how could we forget about the great human companion of the trusty and surprisingly old d6 or six-sided die. To see a set of six-sided dice in person behind the glass of a museum was a bit odd at first glance. I was wondering to myself, “Why is there some dice in this exhibit?” Apparently, we can thank the Romans for popularizing the d6, with the pips and all. 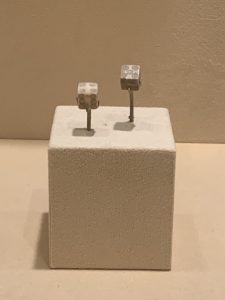 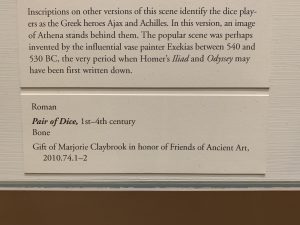 When I returned home, I had the opportunity to attend the Great Plains Game Fest convention. After two very long days full of Cult of the Deep and Forges of Ravenshire, I started to think more about all the board games I had seen at the museum. I began to wonder what the purpose of games are. I have my own modern definition but what about all those ancient games whose inventors and players are lost to the sands of time. I dug a bit deeper and I found some interesting articles from people who do this professionally. I’d like to share some snippets from those papers. From the paper in the Oxford Journal of Archaeology (2016) titled Facilitating Interaction: Board Games as Social Lubricants in the Ancient Near East they posit the following:

“…Board games from the Near Eastern Bronze Age demonstrates their function as social lubricants in cross-cultural interaction. Board games are situated theoretically as liminoid practices, which lie outside the bounds of normative social behavior and allow for interaction across social boundaries.”

Later they reiterate in simpler terms that “board games are situated as tools that facilitate interaction between people across social boundaries (kinship, ethnicity, gender, etc.).” After coming home from a convention, it really just hit me that the games we enjoy and play with others aren’t just an excuse to some healthy competition or just to kick back. But as a means of communicating with those around us and to create deeper relationships with those who we may never have met or would not have been in our normal community. A middle ground where two groups that share very little in common can enjoy the game but also the social interaction. “Huizinga (1950, 13–14) describes play as being ‘outside “ordinary” life’ and describes the ‘stepping out of common reality’”.

I hope that we can all take a moment and think of all the great memories that we have all had enjoying a board game or two and remember that many people before us, and since the dawn of man have sat down together for a game here and there to really allow themselves to enjoy the people around them. To create friendships, to enjoy some competition, learn about others, and come to an understanding that we are all human, and for so many of us that also includes board games. I’d like to leave with another snippet I think is very fitting.

“Exploring the history of board games and game boards involves studying transitions in human wisdom and sensibilities. In other words, such research explores humans themselves through the concept of play, which is indispensable to human life. The history of play is the history of human culture.” – Koichi Mosukawa, The Origins of Board Games and Ancient Game Boards

Big thanks to those who read our post and support us here at B.A Games. We would love to hear what you think about this week’s article. If you have the time, I would seriously consider watching this YouTube video about the ancient Near East game of Ur featuring Tom Scott and Dr. Irving Finkel.