Area control is a diverse genre with a multitude of decisions and choices that inevitably lead to conflict. There are many things to learn from these types of games but there is a unique opportunity that I hope many other people will take advantage of, and that is looking at what board game designer Eric M. Lang did with what is called the Legendary Saga. For those who don’t know about these games, here is a short interview (2:30) he did during the Kickstarter for Ankh that briefly touches on the trilogy of games.

He designed these games to be in the same genre with 3 pillars or attributes: Area Control, Combat, and Gods & Monsters.

By having 3 games in the same genre, by the same designer, and the same publisher, it really opens up the ability to analyze the different mechanics and choices they made. We can take an inside look to how a single designer approached similar problems and ideas. So, let’s dive into one the most prominent differences between these games, the action system.

In Blood Rage, they use a card drafting and action point system that allows you control of your actions as you weigh the cost of each of those actions. Before a round starts, you choose 1 card out of 8 in your hand, and then pass the remaining cards to your left. You will repeat this 5 more times. Once everyone has 6 cards, you discard the rest. The cards you drafted contain upgrades, monsters, and quests with varying action point costs. Now, you are each given a number of action points. During your turn, you can do any action you wish on the board or from your hand. However, each player only gets to play 1 action at a time as you go around the table. You can go around as many times as it takes until no one has any more actions or all of the areas available have been pillaged. You cannot bank action points to hold for the next round as they are reset and you start a new card draft. 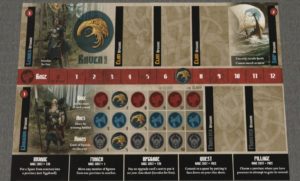 This type of system lends itself to flexibility, time management, and prioritizing what is important to you. You want to upgrade your clan to make it better in the long run or do you want to pillage a province instead? Pillaging can improve your clan as well but it may cost you valuable resources. If you wait to pillage, will your opponent reinforce their troops? There are plenty of choices and depending on your strategy, you have the flexibility in your action points to pick what you want in any order you want. Also, by doing only one action at a time, it allows you to think about your next move in between turns and keeps the players more engaged as there is a very short time between player turns.

However, your ability to pull off combos of abilities is more difficult as your turn is only ever 1 action long. It can be difficult to chain actions and moves together as you are potentially interrupted by other player’s actions.

There are choices to be made from what you and other people drafted. This leads to rewarding people who have experience with the game as they will know strong combinations of cards, know what cards are available in the game, and what cards will be available in the future; which can be very rewarding for repeat players of a game.

But it can be challenging to a new player as they try to understand the game and plan their drafting to support their plans. Their inexperience will work against them as they don’t know what cards will be coming in the future and have no way to really plan for it.

In the end, the system is easy to learn but is very difficult to win versus experienced players. Most games reward experienced players but this one does it even more so as the knowledge of future drafts and combinations in the game can make the game uneven. However, it makes for an incredible fun experience to play people of similar skill levels as you seek to constantly one up each other in order to win.

In Rising Sun, there is a stack of action tiles. Each player takes a turn picking up the top 4 tiles of the stack. They then choose to do one of those actions and put the other 3 tiles back on top of the stack. The catch is everyone does that action but whoever picked that action, and their allies, gain an additional benefit. There are then pausing points to resolve influence over gods and things followed by a final end to the round which is a series of conflicts over areas.

The system is very simple and even offers an in-game way to help other people. It’s easy to learn and has a high amount of player interaction. People need to be active about their interests and pleading their case with other people. It rewards knowledge of people and persuasion. It’s very player interactive and is filled with bartering, promises, alliances, and inevitably betrayals.

The downside to this system, however, is you can feel a lack of control. You may struggle to accomplish many of the tasks that you wish because of the political climate of the game and what the priorities are for the other players. This game will lend itself to players who don’t mind bartering and politicking.

A system that is very simple but packed with a lot of gameplay. Although, because it is based on player interaction, the experience can vary. Many games with social components thrive or suffer on this idea. It leads to a great deal of replayability with the right people but can also suffer a great deal in the wrong groups. It does a very good job in helping to lead the discussions and to lead people to talking points but nonetheless, it is an integral part of the game that can lead to issues with people who don’t necessarily like integrated social game mechanics in board games.

In Ankh, you have a choice of 4 actions during your turn from a communal action tracker. You can do up to 2 actions but the second one must be lower on the track than the previous action. You may also only get 1 action if your action of choice moves the tracker onto an event. Once you finish your action, you must complete an event action. These events include: claiming a monument, dividing territories into smaller territories, or a conflict. Each player takes up to 2 actions and play continues until the game is over.

However, closer to the end of the game, if you are playing 3 or more players, the last two players in score will merge into one God (faction). Each player still gets up to 2 actions, but the merged God will have the actions of both players to control their shared God.

You are able to choose how you want to play your strategy by being free to pick any actions you wish. It’s very versatile.

But, you are not free to choose the consequences of those actions as other players may end up being able to take an event action that you wanted or push the track closer to an event that you don’t want to pursue. You have to think about what the other players are doing since events may happen slower or faster depending on their choices and will mess with the timelines in the game as you move faster or slower to the end of the game.

Ankh’s system is very free and flexible but it can also feel very restrictive at times if you are concerned about other players’ actions, especially at higher player counts. The more players in the game the more likely you will have less control over the events in the game. These events can play a big factor in your strategy and you will likely need to pivot your actions based on who is leading or in the best position throughout the game.

The actions in the game are very combative by nature as you are constantly jockeying for position and prioritizing the most important aspects of your strategy. Opportunities and challenges will arise though and the question is, do you pivot or do you stay the course? If you like a more conflict oriented action system, positioning, trying to figure out who is going to do what, this system will shine for you. For those who want full control of their actions, this one will be tougher to swallow.

The key takeaway here is that these choices are not right or wrong, they serve the purpose of the game designer on how they want the game to function and what kinds of experiences they want the players to have. Games are designed with a purpose and the choices made need to be viewed in that light. There is no perfect game that works for everyone. So go out and design your game, just keep in mind what you want the final game to be. Then make choices accordingly.

Each one of these games tells a story to a player and the decisions made make for very different games on the core level. We will be exploring more aspects of these games in future blogs as we look at how the combat is different, and how the map layout affects these games. So I hope you’ll join us next time.

One thought on “Case Study of the Legendary Saga by Eric M. Lang, Part 1”