Sam “King of the Hilltop” Stockton

What is a legacy game? No, I am not referring to a game that leaves a lasting impression on the game world. I am referring to a specific genre of games referred to as “Legacy” style games. According to Board Game Geek, “a multi-session game in which permanent and irreversible changes to the game state carry over to future plays.”

Why should I care about legacy games?

Some of the largest games that have ever hit Kickstarter and other crowdfunding platforms are in fact legacy games, more specifically Gloomhaven and its sequel Frosthaven (even though it was not necessarily intended to be that kind of game). There are a number of games created every year that try to capitalize on this idea of a game that permanently changes and evolves with its players over multiple sessions. What’s the appeal? Why would someone play such a game? Why would they not play? Do legacy games have to have permanent irreversible changes to be a “legacy” game?

Why would you play a legacy game?

The first “legacy” game I played was Risk Legacy. If you haven’t played it because it is Risk and is neverending, don’t judge this game like you would any other Risk game. It is listed as having an hour playtime and that holds up through multiple plays. It’s a fun game that scratches that tactical itch for me and it is quite a dynamic game. I enjoy a lot of what that game brings to the table being one of the first legacy games.

Anyways, the big appeal that I see for these games comes in three flavors:

#1) Long Term Strategy – It’s only in games that are meant to be played over a large number of sessions that you can unlock the ability to strategize over a long period of time. Maybe in the current game building that one thing right now might help you win, possibly not. However, by planning for the future you can set yourself up for future games where you can win. This also applies to some co-ops where it matters how you win now, instead of just winning. What resources you lose or gain can matter in the long run.

#2) Tales of Epicosity – You now have visible reminders from game to game of interesting situations, epic wins and losses, that allow the board to tell a story of all the fun you had with the game. It actually helps the players remember why they like the game. Helps them to relive those “glory moments.”

#3) Sense of Progression – Legacy games also help you to have a sense of achievement and progression. Because you are changing the board, the factions, the characters, you are part of this process of making something better. We as people innately enjoy this process. Why do you think so many mobile games on your phone use leveling systems and unlocking special perks, titles, and units? A sense of progression and achievement helps us to feel fulfilled and rewarded for what we have done. It can be very satisfying.

Why would they not play?

Legacy games can be controversial for some people because the idea of “vandalizing” a board game is just too much to handle. I can understand that. The fact you are permanently changing things and that game will never be the same again is tough. Also, what if I want to start from the beginning again? Do I have to buy another board game in order to start a clean game? Yes. Now, some games have ways to remove the stickers and purchase a new sticker pack that can be used to reset the game. However, there is still an element of re-purchasing aspects to the game.

Also, some people don’t like games that drag on from game to game. Some don’t even have the chance to play a game with same people over and over again. They may want to have a game that is one and done with no lingering effects. All valid reasons and why everyone is not necessarily onboard with playing or buying legacy games.

Do legacy games have to have permanent irreversible changes?

Looking at all the benefits and reasons for playing a legacy game, it reminds me of dungeon crawlers. Games like Descent or any number of other type games where you play a character that can progress and develop. This is where I think it can be confusing on what makes a legacy game. I am personally for the idea that legacy is a sub-genre of campaign type games as they are basically the same but are physically different in how you apply the changes/progression.

However, the definition will likely be argued for generations to come, just like what defines engine building. However, we can leave that “discussion” for another time. Until next time… 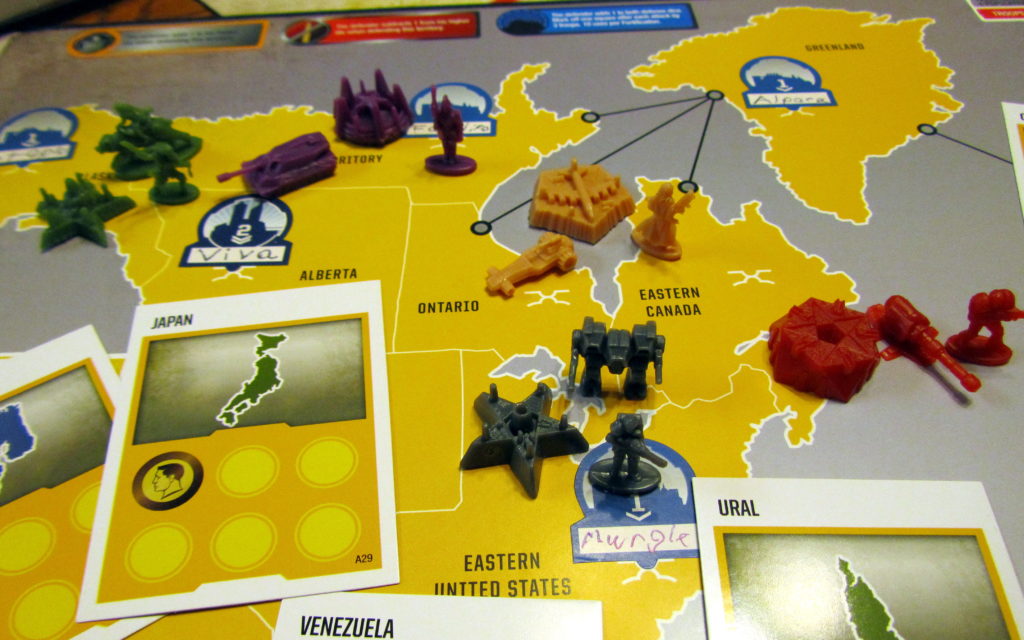 Legacies are the Best

One of my favorite genre’s to date is legacy games. My brother and I often argue about what actually constitutes a legacy game. Apparently my definition is a little looser than his as well as the commonly accepted one. I consider almost any game with a memory. I consider dungeon crawlers as legacy games.

This week I heard about Shadow Force, the spiritual successor to Risk Legacy. This news has brought me great joy. One of the reasons I am so happy about this, besides the nostalgia involved with my childhood, is the news that there will be a coherent storyline added into the legacies mechanic.

Being a Risk fan and looking at the story line that is supposed to revolve around colonizing Mars, this reminds me somewhat of Rick 2210 which, if you were to ask me, is one of the best Risk games. My dream would be to mash up Risk 2210 with Risk Legacy.

The other thing that I find absolutely intriguing is that one of the co-designer designed Heroscape, which leads to the secondary game within the game that they are including. This is supposed to be some sort of skirmish game where players will duke it out in fire fights.

Personally I am exited about Risk Shadow Force and the game within the game.