The Great Thing About the Board Gaming Hobby is….Upgrades!

The Great Thing About the Board Gaming Hobby is….Upgrades!

Today’s blog post is going to be a little different. We are not going to be focusing on game design, theory, or game mechanics. Instead, it’s focus is going to be on another part of the gaming hobby that I personally enjoy.

Before we get to the subject, I would like to briefly discuss one of the interesting things about the gaming hobby. As I have “matured” in the hobby over the years, I have discovered that there are different sections and groups within the board gaming community. One of these groups we have given a lot of attention. That would be the part of the hobby that enjoys game design, and not just designers and publishers who sell their games, but those who create games and enjoy discussing the nuts and bolts of game design. However, today we will be sharing one of my personal favorite things about the hobby and that would be…people who upgrade their games!

I love playing a game that has been decked out with upgrades. I enjoy nice components, sculpted miniatures, and coins/tokens with some heft. In this community of gamers who upgrade their games, there is an even smaller community of gamers who create and have a DIY approach to upgrades. I have seen some truly amazing and talented upgrades and builds. One of the cooler ones I have seen is a Twilight Imperium Table with 3D planets and ships scaled to a much larger size. It was truly a sight to behold. I think it says something about how much a person enjoys a game or pays homage to a game when they take the time to design, and create from scratch the game components.

If anyone who has been following the blog from the beginning or has perused through the blogs, I started a project to create a giant sized Catan game in my backyard. The first post can be found here (after Sam talks about art stuff) and this is a part 2 to that post. The post ended with the creation of hexagon forms and the pouring of 6 tiles for the board. Below you can see the next step which is actually installing the tiles. After pouring the first 6 tiles I realized that I really didn’t want to flatten and compact the entire game site where the game board was going to be. I looked at my options and decided to take another route. Taking the 6 tiles and installing them into their proper place (flattening and compacting the ground), I then took the forms that I had created and used those to pour the remaining tiles in place. This took more concrete in the end but as you can see from the results below, it’s pretty good. I still need to pour the slab on the other side but we will get there in time. 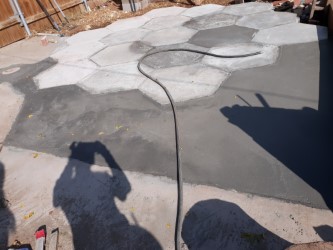 Next comes the part that before I started the project was how to make it so the Island is not always the same island when your tiles are heavy. This is a key feature to Settlers of Catan. The board is always different and is generated by mixing up the tiles and then randomly selecting tiles to create the island. There is no way you are picking up and moving the tiles I have created in any sort of timely manner. Many of these tiles weigh anywhere from 160lbs to 240lbs (depending on the thickness of the tile). The solution is not moving the tile but moving the resources on the tiles to reflect the tiles drawn. This is done by creating resource replicas that can be moved and placed on the tiles. The plan is to eventually clean up the concrete, acid etch, and stain but once again that is in the future.

When deciding on the components to the game I didn’t want anything that was going to have problems if it got left outside or was exposed to the weather for an extended period of time. This didn’t cause too many problems but it meant I had to think of how well any particular item would weather over time. Below is what I did for each resource and component.

Wheat – This was the easiest resource. I went down to my local craft store and bought a few plastic plants that look like wheat.

Brick – I took full size bricks, and made miniature bricks that I could stack in a pyramid.

Ore – I took bricks, cut them to look like ingots with a tile saw and spray painted them a metallic silver.

Wood – I took a couple of 1.25 in. dowels, cut them into 6 in. lengths, stacked them, and in the future spray paint them brown.

Sheep – This one has taken me awhile to figure how to do somewhat cheaply. I have ordered plastic sheep (they are being shipped) that are used in model railroad\ scenery and will be placing them on a vinyl circle that has been cut out of a vinyl 4×8 sheet from the hardware store. That is why you see the blank white vinyl circle.

Number Tokens – I cut out more vinyl circles, and spray painted the appropriate numbers and corresponding letters on the back using spray paint and stencils.

Harbors – I will be cutting out triangles from the vinyl sheet that will go along the outside of the island with the 3:1 or 2:1 stenciled and painted on it. I will also place smaller versions of the resources to go on the 2:1 harbors.

Cities – I did exactly what I did for settlements but then I also cut out 8 in. sections that I then attached to the house shape to make the L shaped city shape that is found in Catan.

Roads – Another easy component where I just took a 2×2 board and cut it into 15 in. lengths.

Robber – I was able to pick up a fancy wooden railing, a large circular wooden couch leg, and a wooden post topper. My 4-year-old daughter helped with the design. I drilled holes and connected them all. The kids decided he should be green to blend into the hills because according to them he loves to steal sheep and green would help him camouflage.

To give an idea of the scale of this board, the island is almost 15×15 ft.

In the end, as a board gamer I like to create things and share things. It’s why my brother and I started this company and it’s what makes us a great hobby and community – creating and sharing the things we love.

Once again this post is different then what we have done before and if you enjoyed it let us know. If you didn’t, let us know. The giant Catan board is nearing completion and I am hoping to finish it up and play a game with my family sometime in the next weekend or so. If you would like to see this happen please feel free to follow me on twitter @bdukeof  where I will be posting updates at it gets finished.

It’s All About Upgrades People!

You see it all the time on Kickstarter but you also see it in the DIY groups (Do-It-Yourself). The varied skill sets, ideas, and motivations people have is astounding. Just like my time in the various board game design communities, these other communities are supportive and full of people willing to share knowledge of how to build and create things. It’s also very visual which for me makes a good time just perusing what people have been working on.

But, enough with work stuff. I am here to just share my love for this side of the hobby as well! However, my Catan is not near the size of my brother’s board. It’s slightly bigger than a normal Catan, just not 15 ft. wide. However, I think I like the colors of mine better…just saying.

It’s almost done, I still have to ink the player components so they are better defined and do some painting of the harbor tokens and player cards but it’s almost there. 🙂

Now, if you know me personally, my true passion is miniatures. Here is an update of what I have been painting for Rising Sun.

So the question is, what board game would you upgrade? How would you do it?